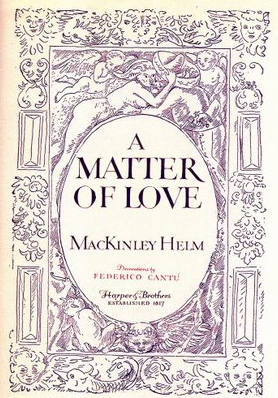 1946: A Matter of Love, and other baroque tales of the provinces. New York: Harper
IF ONE loves Mexico, it is hard to write about it badly. Those who surrender to its curiously unresolved contradictions, its sweetness and violence, its misery and charm, when they come to set down what they have absorbed, seldom fail to produce a worth-while book. Mackinley Helm is no exception.


Decorations . by Federico Cantu. 251 pp. New York: Harper Ec Bros. s2.50. tales of a provincial city of the north,~he has allowed the spirit of the land to guide his ... View free preview 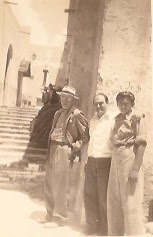 THE ARTIST Federico Cantu was born in Cadereyta, Mexico on March 3, 1907. As a young boy, he was interested in art, and in 1922 became a student at the Open Air School of Painting in Coyoacan under the tutelage of Alfredo Ramos Martinez.
At that point in history, the Open Air School was intent on encouraging the production of a uniquely Mexican art.   Unfortunately for the Open Air School, Cantu was not destined to be an artist who created such work. By the age of 15, Cantu was studying masters in European museums,Académie Colarossi , primarily in France and Spain.
Federico lived in Paris from 1924-1934
He was a student in Jose de Creeft’s sculpture studio and studied the great works of painters such as Botticelli, Picasso, and El Greco. He then spent a few years in the United States, splitting time between Los Angeles 1928-1929 and New York 1937-1941, where he accomplished great gallery successes. It would be approximately 10 years before Cantu would return to his native Mexico.   In 1922, Federico was taken on by Diego Rivera to assist on the Ministry of Education project. Cantu mixed paint colors, traced cartoons onto the walls and painted occasional simple passages within the mural. As a professional artist, Cantu went on to paint many religious scenes, nudes, harlequins, portraits, and in his older years, even tried his hand at sculpting. Federico Cantu died in Mexico City in 1989.
THE ART Cantu’s art was always very European in character, with French, Italian, and Spanish influence more pronounced than Mexican. His work was not fundamentally or uniquely Mexican. This could be attributed to the fact that he spent his most formative years in Europe, developing his personal artistic style. Federico’s work was highly expressive and personal; unlike the muralists, his paintings were not agitated by social problems.  Over the years, Cantu’s work has displayed attributes of his great masters’ influences. He painted many harlequin scenes, which are highly reminiscent of Picasso, and in the late 1920’s spent much of his time creating what many critics called “Botticelli-Cantu’s.” In 1930, Los Angeles Times Reviewer Arthur Miller said that Cantu worked, “With his fingers in the tradition of Giotto, his mind echoing a morbid Botticellian grace, and … an innocence reminiscent of Fra Angelico…” He was truly forging a unique style.   Cantu was a master of line and had an excellent drawing technique. His lines were elegant – supple and winding, marked by curves. In many of Cantu’s paintings, as here, color was used only slightly, for modeling.DOBLE RETRATO (SELF-PORTRAIT) & DOBLE RETRATO (PORTRAIT OF GLORIA) The double portrait in our collection, Self-Portrait and Portrait of Gloria, from 1937(Cantu y de Teresa Collection), show Cantu’s ability to render the human form. The paintings depict the artist and his wife during their first year of marriage. I am tempted to say that these portraits were intended by the artist to commemorate his marriage, being that the figures are modeled in such a way as to ensure that their wedding rings are prominently on display to the viewer. It is impossible to look at this painting and not recognize the union between these two people. The poses of the two figures mirror one another, with the only obvious difference being where they focus their gaze. Cantu looks calmly out at the viewer, while Gloria’s eyes are focused on her husband. Both figures posses dark eyes, sharp features and highly disproportionate, elongated hands. With these hands we are reminded of the elongated figures of El Greco’s Renaissance paintings. 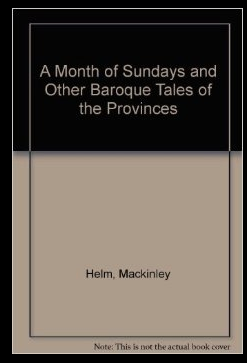